Posted on November 3, 2017 by passportocean

Our beautiful planet is widely covered with water resources, mainly represented in the shape of oceans and seas. These are a sign of greatness and provide numerous benefits not only for the animals living in them but also for the people who depend on them. We rely on oceans to provide us with food, minerals, and oil. They are also used as a source of recreation and transportation.

It is important to perceive ocean awareness as our responsibility, not a choice. Numerous marine species are threatened or on the verge of extinction. According to the ESA (Endangered Species Act), around 2,300 marine species are marked as endangered or threatened. As our ecosystem consists of interdependent species, both animals and plants, extinction of only one can cause a chain of reactions and affect the balance of the whole ecosystem.

Unfortunately, irrational anthropogenic activities lead to the extinction of various species, causing ecological instability and insecurity. For better understanding, we have prepared a list of top 10 endangered marine species.

Hawaiian monk seals can be found mostly in the area of Hawaiian Islands. They are excellent divers and can stay underwater for ten minutes.

It is estimated that there are only around 1000 of Hawaiian monk seals left. Their population was reduced drastically due to human activities, as they were hunted for meat, skin, and oil. To make things even worse, they began facing starvation because there wasn’t enough food left for them. Hawaiian monk seals are also known to often get entangled in fishing nets and plastic debris, causing inevitable death.

Due to the lack of ocean awareness, there is little hope for this species. It’s time to act now to secure a bright future.

Being majestic as they are, even blue whales are on the verge of extinction. These magnificent animals are the biggest species that we know of. They can be up to 30 meters long and weigh up to 200 tonnes.

Blue whales have been wildly hunted for meat for many years. Regardless of the international hunting ban in 1966, their populations continue to decrease due to lack of food and (il)legal whaling. 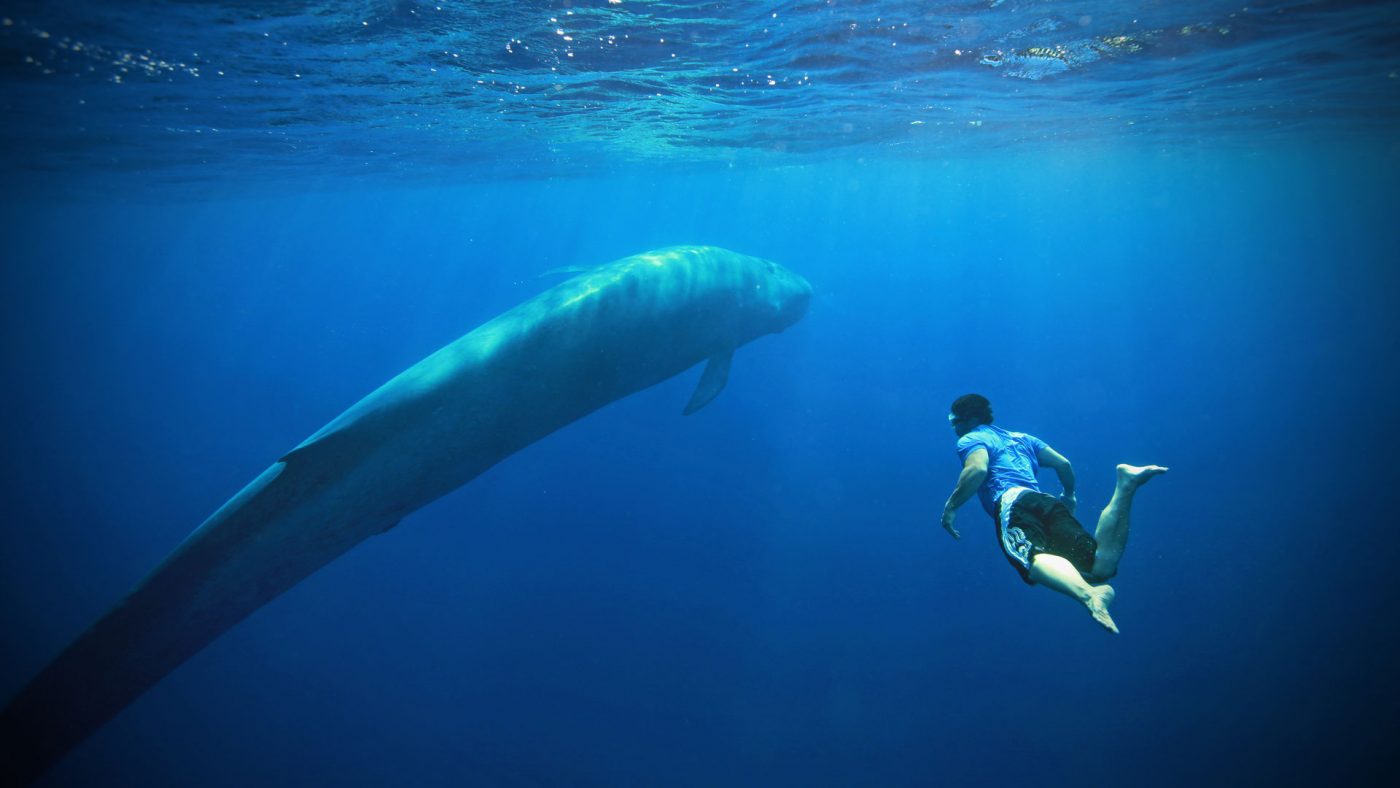 It is suggested that approximately 200,000 whales were killed over decades of hunting. Only less than 5,000 still exist.

Hawksbill turtles are found in tropical regions all around the globe. They are known to elegantly glide through the water and eat half a tonne of sponges each year.

Their population has been drastically reduced during the last century. They were often killed for their shells and even meat. In some countries, the population was also reduced due to the harvesting of their eggs.

One major factor contributing to their reduction is also the shrinking of coral reefs which serve as their feeding grounds.

Whale sharks are the ocean’s biggest fish, growing up to 12 meters in length. They feed more like whales than the sharks. They simply open their huge mouths and gather small fish and plankton from the water. 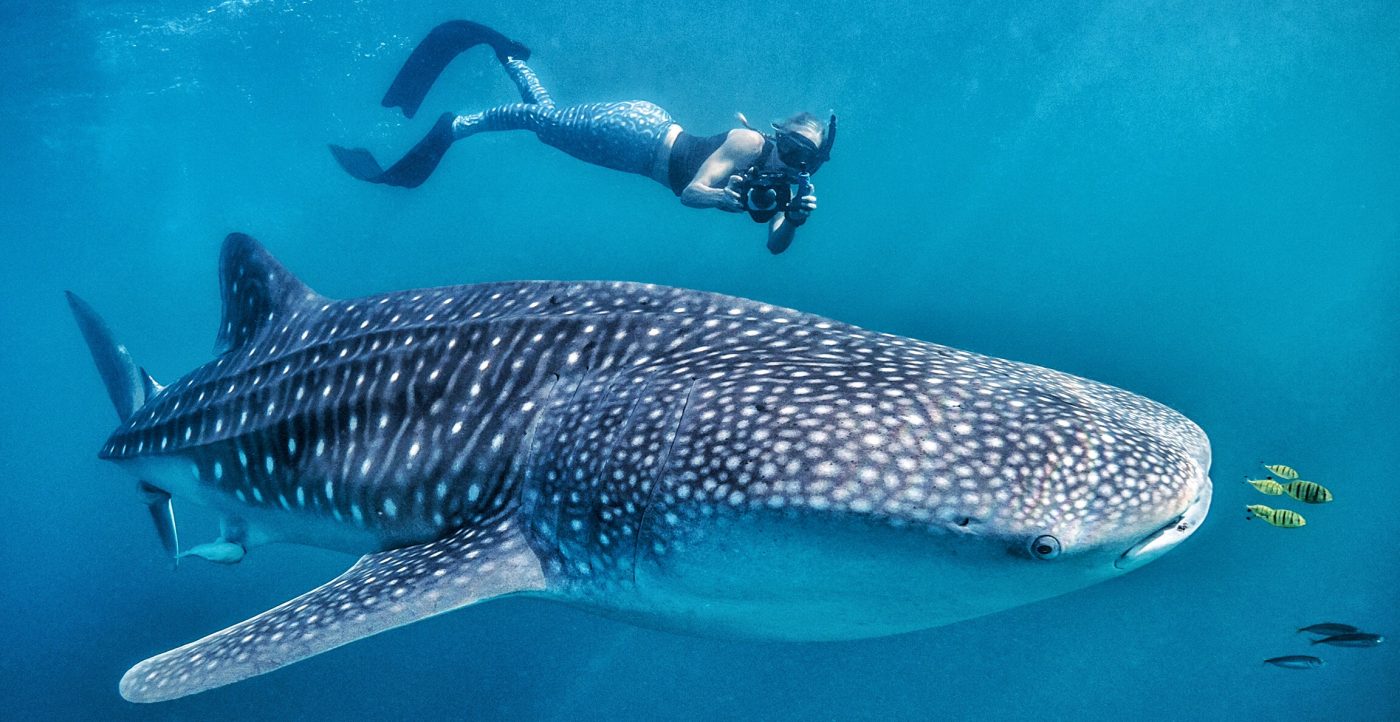 Whale sharks are exceptionally gentle but face great danger due to overfishing and lack of ocean awareness by Asian nations such as Philippines and Taiwan.

The majority of Bluefin tuna sadly ends up on the plate. They are widely hunted for their meat and are unable to escape the fishing boats even though they can swim up to 70 kilometers per hour. 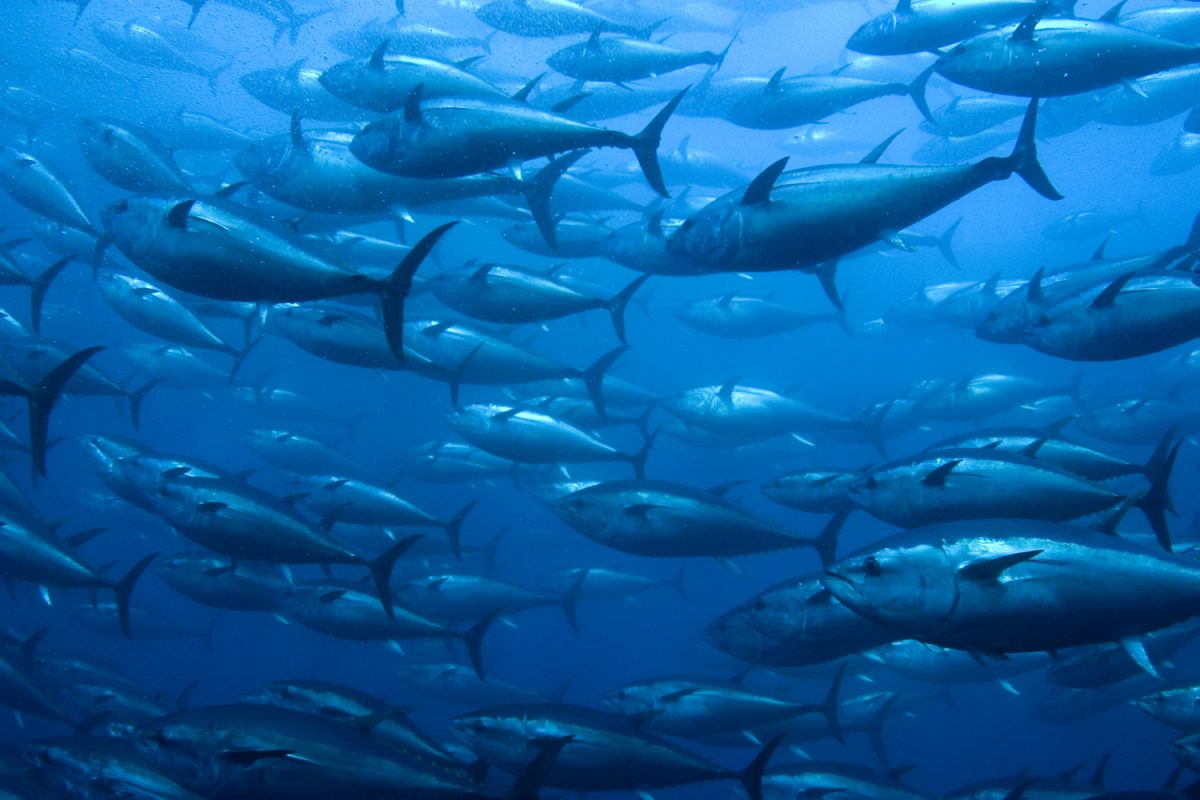 Hammerhead shark is another species that is dying out due to the lack of ocean awareness. These sharks can be found in tropical regions and are commonly victimized by getting their fins cut off while they are still alive. 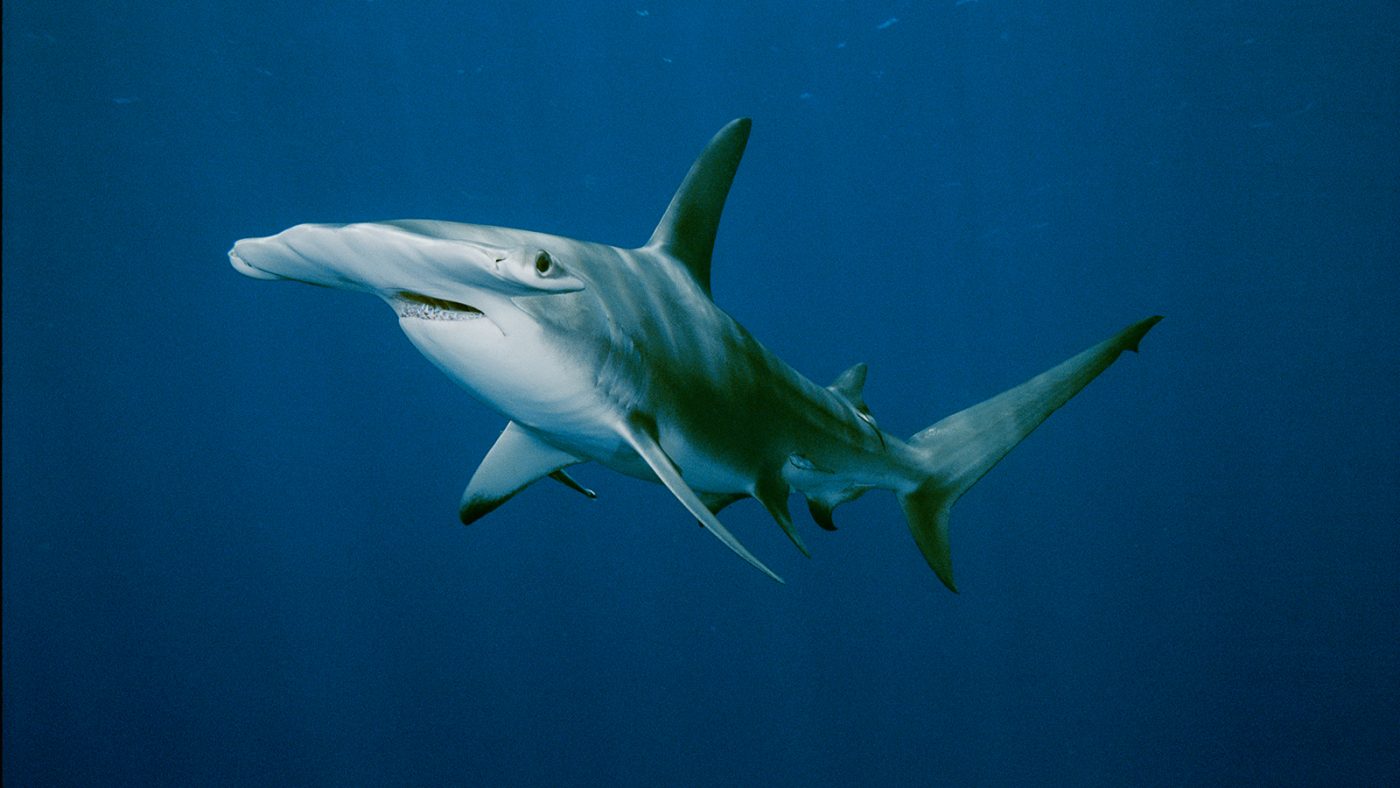 The bans on these horrible acts are in place; however, illegal activities continue to endanger the species.

Manatees are gentle giants weighing up to 600 kilograms. They are born underwater and stay in there throughout their lives. Every few minutes they have to swim up to replenish the oxygen supply. 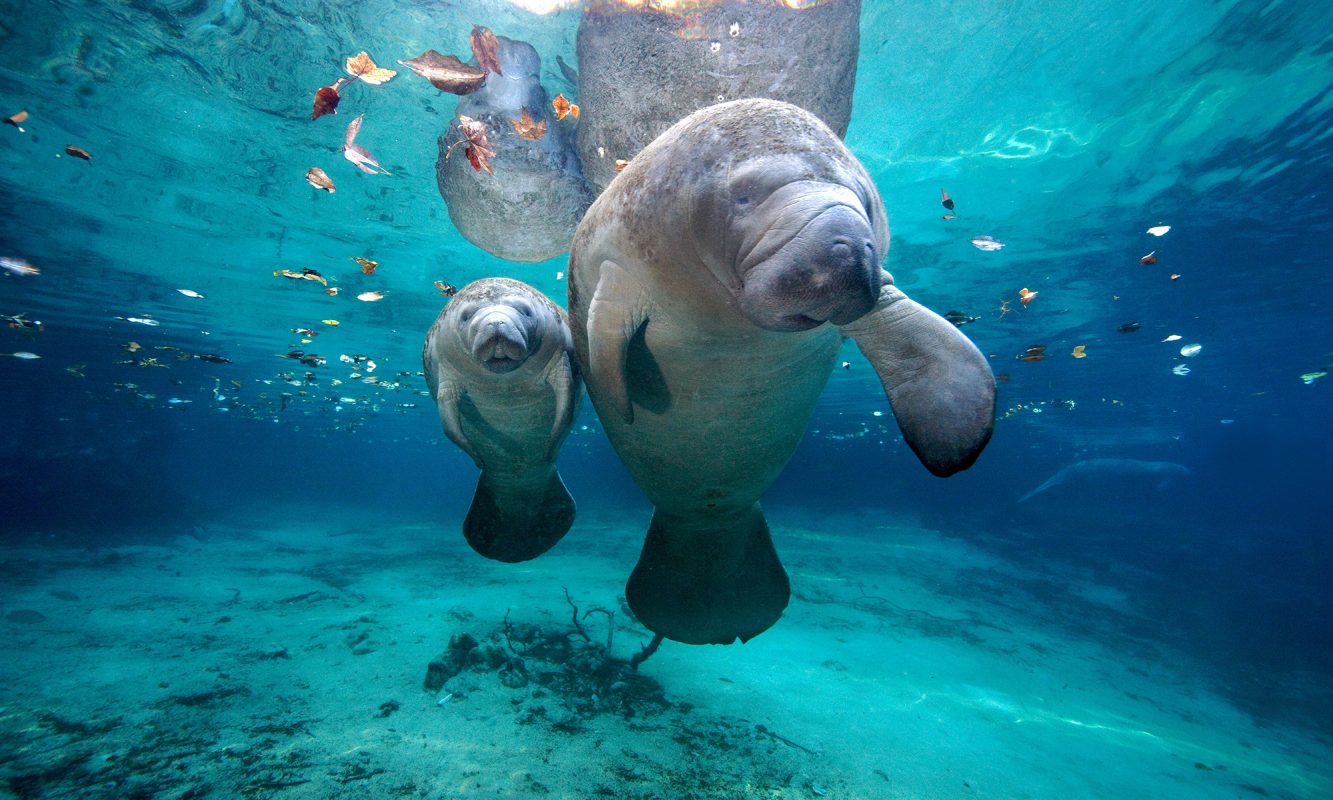 Manatees’ population is highly insecure as they are often accidentally killed by boats. They are also losing their habitat and are often poisoned by human-made herbicides and pesticides.

The polar bear is the only bear type considered to be a marine mammal. They are equipped with thick layers of fat and covered with fur. After birth, it takes more than 2 years for the offspring to learn the surviving methods.

Due to the climate change, ice sheets are melting, and the polar bears end up stranded or without access to their feeding grounds.

Sea otters are playful animals that sleep and give birth in water. Fur hunters have pushed this species to the verge of extinction until only a couple of thousands of them remained.

Today, sea otters are protected and have grown in numbers to over 100,000. The species, nevertheless, remains endangered.

One of the largest species on the Earth, humpback whales migrate tens of thousands kilometers per year. They were wildly hunted for meat until the whaling ban in 1966 and increase in ocean awareness is necessary to keep the species alive.

The population of humpback whales dropped by more than 90%. It is estimated that there are approximately 2,500 of them still alive today.