Did you know that Orcas are the largest member of the dolphin family ? That they prey on a diet of fish, seals and even large marine mammals such as whales ?!  Or that some scientists consider them to be smarter than chimpanzees? Or that they have been around for roughly eleven million years? Here are some surprising facts about Orcas you might not have heard.

Killer whales, also called orcas, hunt everything from fish to walruses – seals, sea lions, penguins, squid, sea turtles, sharks and even other kinds of whales are all on their menu.

Depending on the season and where they are, their diet varies – some eat plenty of fish and squid, others feast mostly on seals and penguins. But wherever they are in any of the world’s oceans, average-sized killer whales may eat about 227 kilograms of food a day!

Despite being called killer whales, orcas (Orcinus orca) are actually dolphins. Historically, sailors took to calling these marine mammals whale killers after witnessing them preying on whales and other marine mammals.

Over time the name changed. While these large animals are apex predators that threaten fish and other animals, as of 2013 there’s never been a record of wild orcas attacking humans.

Orcas have evolved complex culture: a suite of behaviors animals learn from one another. They communicate with distinctive calls and whistles. They can live 60 years or more, and they stay in tightknit matrilineal groups led by older females that model specific behaviors to younger animals.

Scientists have found increasing evidence that culture shapes what and how orcas eat, what they do for fun, even their choice of mates.

Only humans are known to have evolved based on culture, so this realization about orcas is a big deal for science.

4 – Orcas are found in all Oceans

Killer whales inhabit all oceans of the world. Next to humans and perhaps the brown rat (Rattus norvegicus), killer whales are the most widely distributed mammal.

Populations have been documented foraging for long periods of time in shallow coastal and inter-tidal flats in just a few meters of water.

While killer whales can be found around the world, they are much more common in highly productive areas of cold-water upwelling; including the Pacific Northwest, along northern Norway’s coast in the Atlantic, and the higher latitudes of the Southern Ocean.

In addition to being found in colder water, killer whales also have been seen in warm water areas such as Florida, Hawaii, Australia, the Galapagos Islands, the Bahamas, and the Gulf of Mexico and more temperate waters such as New Zealand and South Africa. Such sightings are infrequent, but they do demonstrate the killer whales’ ability to venture into tropical waters.

Two years ago, scientists suggested whales do this to focus their attention on the survival of their families rather than on birthing more offspring. But now this same team reports there’s another—and darker—reason: Older females enter menopause because their eldest daughters begin having calves, leading to fights over resources. The findings might also apply to humans, the scientists say.

6 – Most males never leave their mothers

Using 36 years of data on Orcas in the Pacific Northwest, the researchers found that for males over 30, the death of a mother meant an eightfold increase in the likelihood of death within a year.

Killer whales stick with their mothers their entire lives. Dr. Foster suspects that mothers help sons with foraging or offer protection in encounters with other males. Among female orcas over 30, there was only about a threefold increase in the likelihood of death in the year after a mother’s death. “It makes more sense for the mothers to invest more in their sons, because there is no increased burden on the family group,” Dr. Foster said. “Children of sons move on to new family groups.”

7 – Orca groups are divided into pods and communities

Killer whales use a variety of sounds for communicating, socializing and finding prey. These sounds include clicks, pulsed calls, and whistles. Their sounds are in the range of 0.1 kHz to about 40 kHz.

Different populations of killer whales make different vocalizations, and different pods within these populations may even have their own dialect. Some researchers can distinguish individual pods, and even matrilines (the line of relationship that can be traced from one mother to her offspring), just by their calls.

Meanwhile, pods speak completely different languages. Clans coming together for a chat would be like an English speaker, Russian speaker and Chinese speaker trying to have a conversation.

8 – Orcas have no natural predators

Orcas are apex predators—they are at the top of the oceanic food chain and have no natural predators. Humans have not even spent much time hunting killer whales because of their speed and streamlined bodies—according to NOAA, it would take 21 orca whales to produce the same amount of oil as one Sperm whale.

Lacking any natural predators of their own these marine mammals are able to freely hunt and kill other oceanic creatures without the fear of being hunted themselves.

9 – There is more than one type of Orcas 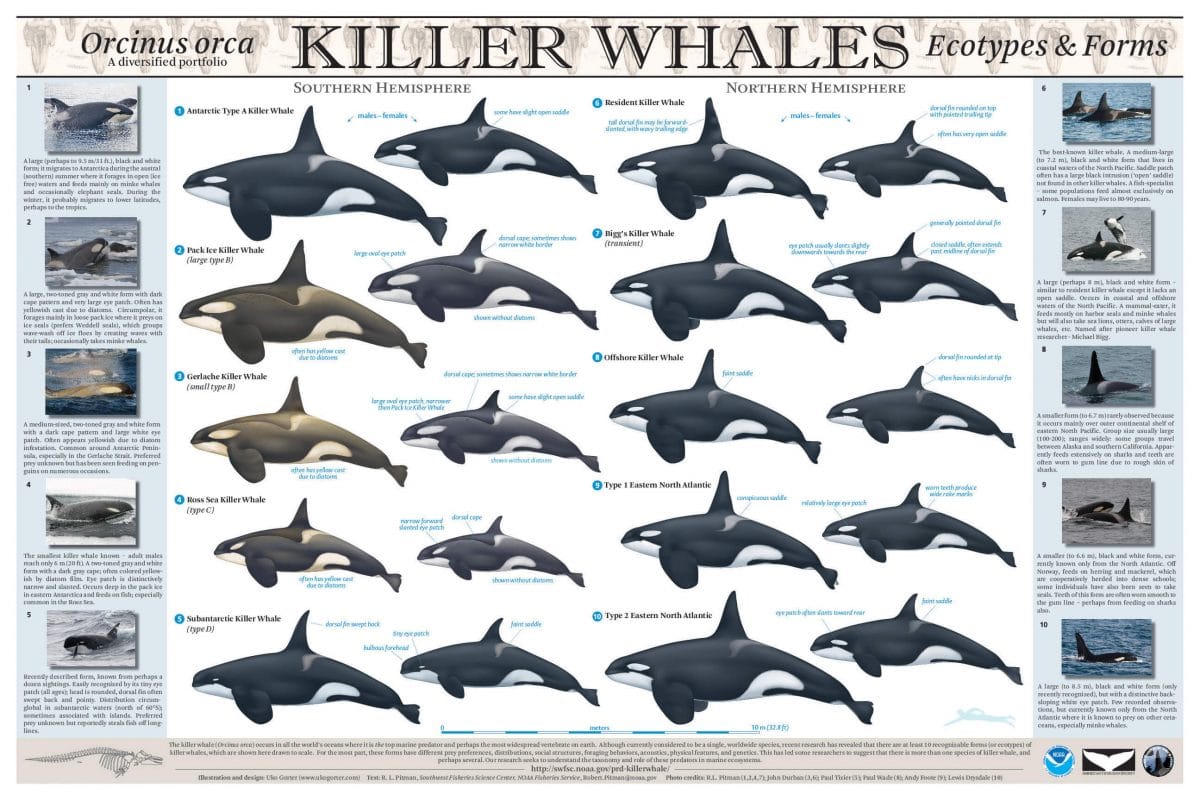 Orcas were long considered one species, but now it appears that there are several species (or at least, subspecies—researchers are still figuring this out) of orcas. As researchers learn more about orcas, they have proposed separating the whales into different species or subspecies based on genetics, diet, size, vocalizations, location and physical appearance.

Determining species of killer whales is important not only in gaining information about the whales but in protecting them—it is difficult to determine the abundance of killer whales without even knowing how many species there are.

10 – Orcas have the 2nd heaviest brain among marine mammals

Neuroscientist Lori Marino and a team of researchers explored the brain of a dead killer whale with an MRI and found an astounding potential for intelligence.

Killer whales, or orcas, have the second-biggest brains among all ocean mammals, weighing as much as 15 pounds. It’s not clear whether they are as well-endowed with memory cells as humans, but scientists have found they are amazingly well-wired for sensing and analyzing their watery, three-dimensional environment.

Scientists are trying to better understand how killer whales are able to learn local dialects, teach one another specialized methods of hunting and pass on behaviors that can persist for generations — longer possibly than seen with any other species except humans.

These researchers have yet to find evidence that an orca in the wild has ever killed a person. But they aren’t surprised that the world’s biggest, most powerful and possibly smartest predator, captured and kept for years in a tank, cut off from the influences of an extended family, could have a fatal encounter with a human.

11 – A female Orca gives birth to 1 calf every five years, and she averages 5 calves per lifetime

Female orcas give birth every three to ten years. The gestation period is very long, and it lasts for 15-18 months and births occur in any part of the year, but most often occur in the winter season in their respective regions.

Studies say that 50% of females do not reproduce once they are close to turning 40 years old, and those living in the North Pacific do not usually reproduce after age 46.

12 – Killer whales have around 45 teeth (each around 7.6 centimeters long)

They are shaped for ripping and tearing prey. Instead of chewing their food, they take one big gulp – and believe it or not, these brilliant beasts can swallow small seals and sea lions whole! Bigger prey is ripped into chunks before being eaten.

They are known to hunt and consume shark meat when they are having difficulty finding other less defensible prey. In fact killer whales have also been known to hunt variety of marine mammals including some of the biggest known whales.

Orcas do not have smelling organs or a lobe of the brain dedicated to smelling, so it is believed that they cannot smell. They do, however, have good senses of sight and hearing. They can hear better than dogs and even bats.

Using this excellent sense of hearing, killer whales practice echolocation. This means that killer whales produce sounds and then listen to the echoes. In this way, they can tell if objects or other animals are near or far, and just exactly how near or far. 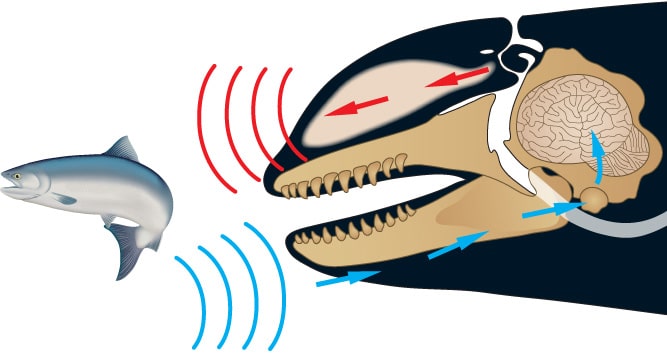 15 – They can sleep with one eye open

Like other dolphins, Orcas  cannot completely go to sleep, because they have to go up to the surface to breathe every now and then. Instead, they sleep with just half of their brains. If a killer whale’s left eye is open, that means the right side of its brain is awake and the other asleep, and vice versa.

16 – There are 52 Orcas in captivity all over the world

Killer whales, more properly known as orcas, have been kept in captivity since 1961, helpless victims of a blatantly commercial experiment which has seen dozens of wild orcas plucked from their families and forced to live in artificial social groupings which bear scant resemblance to their natural order.

As of August 2014, there were fifty-two killer whales held in captivity in eight countries. Twenty-eight of them were in the United States. Of these killer whales, eighteen were captured from the wild and thirty-four were born and raised in captivity.

One female orca even lived to 103 ! In captivity, however, orcas’ life expectancies are often cut short.

18 – They can control the flow of blood to their organs

Indeed, Orcas are able to control the flow of blood to their hearts and brains, which keeps them from suffering from a lack of oxygen when they are deep underwater.

19 – They spend most of their time looking for food

Killer Whales spend 60% of their time foraging for food. killer whales do not migrate, but they have been known to travel hundreds of miles to find fresh food that is in “season”

20 – They are very fast swimmers

Killer whales are among the fastest swimming marine mammals. They can swim as fast as 48 kph (30 mph), but they usually cruise at much slower speeds, about 3-10 kph (2-6 mph) !